Due to his vision, Tony Spear is known for making tacklers miss but with only one season left at South Gwinnett (GA), the senior running back is not going to miss his opportunity of proving he’s ready to play on the next level while helping the Comets become a better team in 2019.

If you haven’t seen Spear on the field, his page on hudl.com will provide proof of his evasiveness and speed, which resulted in some impressive rushes last season and understandable comparisons (from his coach) other than size to James “Boobie” Miles from Permian High School (TX).

“I feel like I’m going to do good but my mindset is different because this is my last year to show colleges and my coaches what I can do before I go off to college,” said Spear, who is listed at 5-9 and 145 pounds.

In 2018, Spear met his goals of rushing for more yards and getting more time on the field but he planned to get in the end zone more than once. This season, he is striving to score five touchdowns in coach Steven Davenport’s deep backfield.

“I feel like I do what a running back should do–don’t fumble the ball, pull a move on somebody, and have the speed,” Spear said. “Dorian [Powell] is big but I’m faster and more shifty. He’s good for going through the hole. Another guy is Deion [Downer]. He is kind of like me but he doesn’t do a lot of shifty stuff but he’s got the speed. [Shemar] Watson is like Dorian but smaller.”

Last season, the Comets earned a 4-7 overall record and 2-3 mark in region play. South Gwinnett begins the 2019 season at home against Central Gwinnett on August 23. 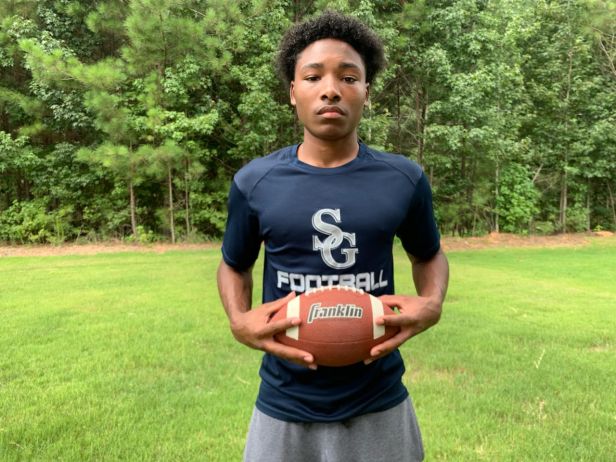 Even though Spear looks comfortable on the field and changes direction to avoid contact with ease, he didn’t begin to take football seriously until his sophomore year due to fear. Spear also wanted to be a wide receiver instead of a running back and built an interest for football by just watching the game.

“My 10th grade year was when I realized I wasn’t scared anymore but I was a little bit because I didn’t get reps like that,” Spear said. “But when I went out there I was like this ain’t nothing and I was ready to go back out there and do it again. At that point in time, I was like I’m ready for anything basically that is involved with football.”

With a 4.4 time in the 40-yard dash, Spear has earned some interest from Alabama A&M, Reinhardt, and Savannah State, while being in constant contact with the running back coach from Alabama A&M.

Plus the best thing about this process is that Spear has his father, George Spear, to help him make the best decision for the next part of his journey.

“He influences me to play football because he is my biggest fan,” Tony Spear said. “He’s always cheering and rooting for me to do more. He knows I can do it so he is always out there. I know that he is going to be there if nobody else is going to be at the games.”